As Trump has won additional contests in every region of the country, many commentators have openly wondered what impact (whether good or bad) a Trump candidacy will have on the Republican ticket down ballot. When digging into the results of his recent victories, it becomes clear that a Trump candidacy ...

[vc_row][vc_column][vc_column_text]While the public's attention remains fixated on the presidential primary, the congressional race continues to clarify. More than a year ago, the NCEC projected that Democratic gains in the U.S. House are likely to exceed 20 seats (see Feb. 6, 2015). Our projection remains that the House Democrats can expect ...

National polls continue to show Hillary Clinton with an advantage in the Democratic presidential primary. Recent national polls give her a roughly 10-point lead and most state polls show her having some advantage. As we move into Tuesday's contests, the open versus closed nature of each primary could clarify the ...

John Kasich may be closing in on Donald Trump in Michigan. According to an American Research Group poll published March 5, Kasich leads Trump 33 percent to 31 percent. The ARG poll may be an outlier, as previous well-respected surveys done around the same time show Trump with a double ...

The argument that Hillary Clinton is the strongest general election candidate is seriously complicated by the latest Quinnipiac national poll, taken after the New Hampshire primary, between Feb. 10 and 15 (PDF download). Clinton trails four of the five Republican candidates, leading only Donald Trump with a tenuous 1 percent. ...

The Democratic effort to retake the U.S. Senate in 2016 will be strongly affected by the presidential election. If Hillary Clinton's impressive lead in the polls is any indication of her party's potential, Democrats will be well-positioned to win the handful of seats needed to regain control. With a net ...

On January 30, 2014 the NCEC lost its National Director Russell Hemenway. Beginning with his activity in the Lexington Democratic Club, Russ spent his lifetime as a reformer. Through his work at the NCEC, Russ was an outspoken critic of the Vietnam War, earned a spot on Nixon's enemies list, and was a driving force behind campaign finance reform and the establishment of the FEC in 1971.

Democratic Senator Kay Hagan recently lost her bid for reelection in North Carolina to Republican Thom Tillis. Careful analysis strongly suggests that Hagan and her team should not have shied away from Obama in her 2014 campaign. Obama's participation could have helped activate the state's disinterested Democratic and African-American bases ...

Democratic Senator Mark Warner recently won his bid for reelection in Virginia over Republican challenger Ed Gillespie. Warner was expected to win by a healthy margin given his incumbent advantage and an under-financed opposition, however, the contest was much closer than anticipated. Warner was considered the most popular elected official ... 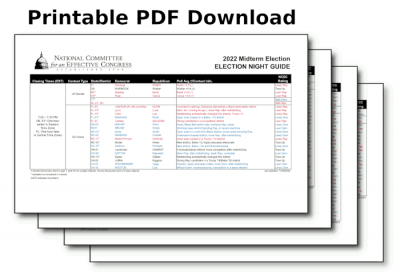 Election Day is November 8th. After a summer of encouraging news for Democrats, recent coverage is focused on whether we face a Republican takeover of Congress.