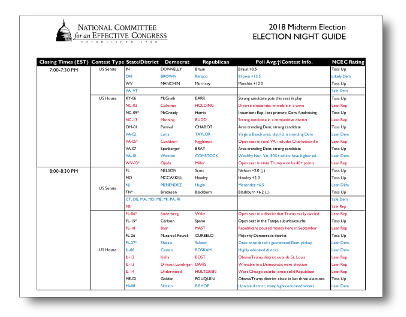 After a long wait, voters have a chance to deliver their verdict on the first two years of Donald Trump’s presidency. With the election tomorrow, history suggests that the Democrats are poised to make big gains in Congress, including the potential for control of the House of Representatives. But unlike previous wave elections which extended to both chambers of Congress, we see  a more muddled picture where Democrats do well in the House, while the Republicans maintain or slightly grow their majority in the Senate.

History suggests that Election Night will be a good one for the Democrats, and delving into the specific contests gives reason for optimism:

Though the overall electoral battleground favors the Democrats, there are still reasons to temper expectations:

To help you navigate the election, we have prepared our Election Night Scorecard that highlights the key races that will determine who controls the House and Senate. Thank you to all the members who have made our work possible this cycle.